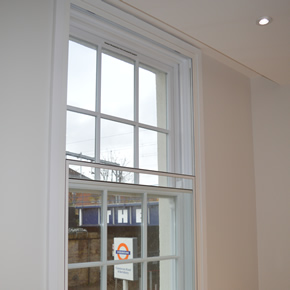 A derelict site in a Conservation Area has recently been transformed into an energy-efficient mixed use development, benefiting from Selectaglaze’s secondary glazing.

The site was acquired by sustainable property development specialists, Igloo, in 2012. The company proposed a complete renovation; its plans involved restoring the Victorian townhouse and courtyard to create a sustainable, eco-focused development of 25 apartments and 3 commercial studios.

The restoration had to be carried out carefully. As the townhouse is in a Conservation Area, Igloo was prohibited from making any alterations to the exterior; the building’s historic features had to be retained.

However, as the site neighbours a busy train route – which runs in and out of central London – noise was an issue. With its original Victorian windows still in place, the building also suffered from frequent draughts.

The company specified six slimline units from its Series 20 range of glazing solutions, which have been designed for heritage projects. By trapping an insulating layer of air, secondary glazing is able to reduce heat loss and draughts simultaneously.

The installation successfully reduced the ingress and egress of noise: Selectaglaze recommended 6.8mm Stadip glass, an acoustic laminate which absorbs the sound of busy city life.