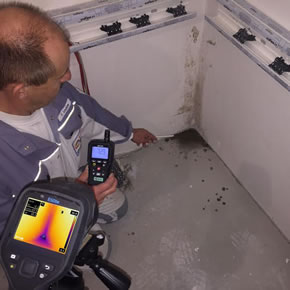 By identifying insulation faults, underfloor leaks and detecting moisture which can lead to mildew, thermal imaging with the FLIR E50bx can be used to improve properties.

The FLIR E50bx has been designed to detect moisture, which can lead to mildew. In interior decoration, mildew is an increasingly common problem: factors such as bad insulation, poor ventilation or old windows can cause condensation to build up. By turning their heating off to reduce energy costs, tenants can encourage the growth of condensation further.

FLIR E50bx’s patented MSX feature allows image elements, which are taken by the unit’s in-built digital camera, to enhance the thermal image and identify any problems.

Designed for accuracy in surveying and reporting, the compact infrared camera is suitable for a range of building applications.

The meter transferred the relative temperature and humidity data to the thermal image on the camera. This made it easy for FLIR technician, Martin Meyer, to locate an area of moisture on the wall, which signified a leak in the underfloor heating system.

The image could then be relayed to show a professional where the system needed to be repaired.

By making the need for improvement visible to customers, FLIR thermal imaging can encourage them to make the necessary amends to their property.

FLIR offers free thermal imaging of a building’s façade to identify sources of heat loss from poorly installed or missing insulation. This image can be used to calculate the energy savings that could be made by fixing the problem.

FLIR Tools software, which is included with the FLIR E50bx, can be used to evaluate the thermal images; the FLIR Reporter software can then be used to create professional reports for the benefit of clients.