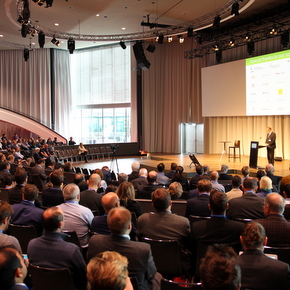 The two day conference on ‘Advanced Building Skins’ in Bern, Switzerland brought together over 600 delegates, including architects and engineers from around the world to discuss the latest advances in building enevelope design and construction. 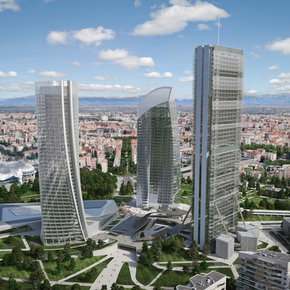 CityLife masterplan in Milan developed by ArchA including the the Generali Tower designed by Hadid Zaha Architects, London.

One of the most inspirational presentations for me was Paolo Zilli from Zaha Hadid Architects speaking about the parametrical design features and construction processes of the spectacular Generali Tower in Milan – also see details in a previous Blog.

On the second day of the conference there were more standout presentations with project examples from around the world.

One of the recurring themes at the conference was innovative design solutions for building-integrated photovoltaics (BIPV) including performance analysis of multi-coloured systems, and balancing aesthetics and technology. We also heard much about sustainable cladding and facades, dynamic solar shading technologies, and industrial 3D printing in the building industry.

And finally, in the last session on the last day, we got to hear more from Vincenti Montes-Amoros about ‘When buildings attack – Death ray buildings’.

Death ray buildings were in the news in 2015 after glare from reflected from the glass-fronted ‘Walkie Talkie’, a 38-story skyscraper on Fenchurch Street in central London, began melting cars, frying bike seats, and scorching pavements. The press had a field day and called it the ‘Death ray skyscraper’. The notoriety was not welcome, especially by the owners of the building. However it did spark a flurry of activity around the world as other projects were scrutinised for problems with glare.

It is amazing that there a virtually no planning regulations that deal with this growing problem. We had more in depth details on the subject at the conference, including some of the science and some of the myths.

We will provide a synopsis of the contributions on this topic on Buildingtalk shortly as well as on some of the other key issues raised at the conference.